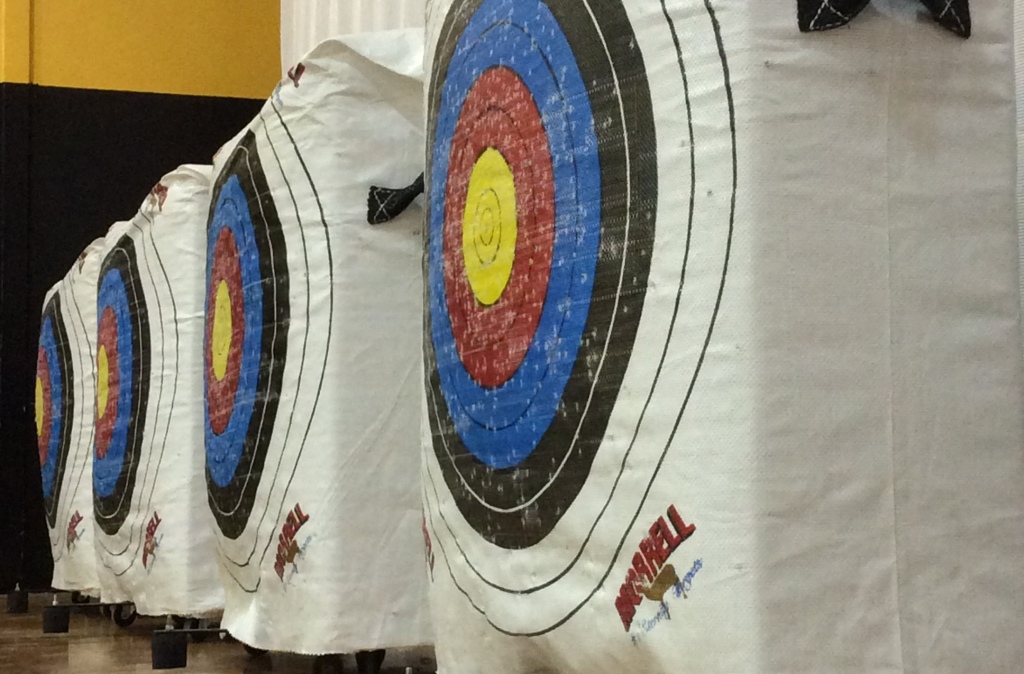 I had forgotten, but recently one hour into a youth group’s Bible study reminded me of an intimate God session that had consumed my soul…the kind of Rhema-instruction that totally opens your understanding to an element of Scripture.  It was about this time last year.  Our Ag teacher had asked  ((more like cashed in an obligatory favor )) if I would help tabulate scores at an archery competition he was putting together for his students.  Hey…he knows my (seriously lacking) math skills and still asked.  I’ll submit myself to the torture of simple, mental math for a friend.  Wouldn’t you?

Anyways, the competition had three phases: High-point from 10 meters, High-point from 15 meters, and “21” from 15 meters.  As I sat there and observed these kids taking their practiced stance as they held their bows in position…taking careful and patient aim to draw back the arrow that was notched into the bowstring…and the rapid, fluid release as the arrow quickly met its target…I was intrigued.  Ten meters and practiced shooters made for clustered arrows in the center of cluttered targets. 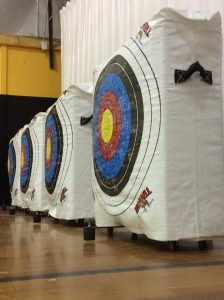 Then, fifteen meters.  Welllllll…I will just say, THIS is when God got my soul’s attention and “took me to school.”  The outer rings of the targets – and even the white space around the targets – were not neglected by the kids’ arrows in this round.  There was not such a party going on in the two, inner orbs of yellow and red anymore!  What made such an impactful, difference?  Same kids, same bows, same arrows, same targets.

Not the same proximity.  There were now five more meters of gymnasium real estate between their stance and their target.  Distance made the marked difference in the physics stuff involved with the accuracy of their archery-ness…ya know, stuff like velocity, air conditioner wind interference, vision (for those poor ol’ near-sighted kiddos), oscillation, Archer’s Paradox, inertia, yada…yada…yada…

A not-so-random-and-very-intimidating-yet-relevant equation I found online.  Here’s my version of an equation that is much more practical:  ((COFFEE))^3 <0900 = a very productive day

Now to the good stuff…God spoke to me about sin while I watched these kids take aim and miss the bullseye more often than not.  Many applications of the word “sin” (Greek is  hamartano) means to “miss the mark (and so not share in the prize)…to err…”  What is the mark we aim at?  Metaphorically, it’s that small, yellow circumference in the middle of the target.  Realistically, as Christians, we are aiming at looking like Jesus Christ, which is narrated for us in the Scriptures…and especially and particularly in the Gospels through Jesus’s earthly ministry.

For the death that He died, He died to sin once for all; but the life that He lives, He lives to God.  Likewise you also, reckon yourselves to be dead indeed to sin, but alive to God in Christ Jesus our Lord.  Therefore do not let sin reign in your mortal body, that you should obey it in its lusts.  And do not present your members as instruments of unrighteousness to sin, but present yourselves to God as being alive from the dead, and your members as instruments of righteousness to God.  For sin shall not have dominion over you, for you are not under law but under grace.  ~~Romans 6:10-14 (NKJV)

The analogy is this…the target is the Word of God, the life of Jesus Christ, the yielding to the Holy Spirit.  To aim at our goal, we must get in position and focus on it…and the closer we are to the mark, the more accurate our aim.  Here’s a kicker, though: much like those kiddos with their bows and arrows…before we can shoot for the target, we have to let go of something, release, surrender.  Ouch.  Sometimes we find false comfort in maintaining a practiced stance and hanging on to what’s in our hands.  Sometimes…it is hard to commit and follow through in that release. 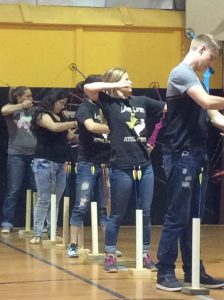 lso, when we move away from the target (notice the target does not move), it becomes more difficult for us to aim and hit that target.  Every time we sin, it’s like taking a step away from the goal.  The common-sense way to close that relational distance is to move closer to the mark.  I’m no Katniss Everdeen, which is why I have to stay close to God with His goal for me in sight.  I have to practice my stance and continue releasing and surrendering.  As my favorite disciple once said…

“Not that I have already attained, or am already perfected; but I press on, that I may lay hold of that for which Christ Jesus has also laid hold of me.  Brethren, I do not count myself to have apprehended; but one thing I do, forgetting those things which are behind and reaching forward to those things which are ahead, I press toward the goal for the prize of the upward call of God in Christ Jesus.”  ~~Paul in Philippians 3:12-14

Know your target.  Get as close as you can.  Focus.  Take aim.  Release.

Learning and Growing with You ~