No Catchy or Creative Title for This One.

Luke 4:5-7…”Then the devil, taking Him up on a high mountain, showed Him all the kingdoms of the world in a moment of time.  And the devil said to Him, ‘All this authority I will give You, and their glory; for this has been delivered to me, and I give it to whomever I wish.  Therefore, if You will worship me, all will be Yours.’”  ((Temptation))

Matthew 22:15, 34-36…”Then the Pharisees went and plotted how they might entangle Him in His talk…But when the Pharisees heard that He had silenced the Sadducees, they gathered together.  Then one of them, a lawyer, asked Him a question, testing Him, and saying, ‘Teacher, which is the great commandment in the law?’”  ((Persecution))

Luke 5:12…”And it happened when He was in a certain city, that behold, a man who was full of leprosy saw Jesus; and he fell on his face and implored Him, saying, ‘Lord, if You are willing, You can make me clean.”  ((Healing))

Luke 8:43-44, 47…”Now a woman, having a flow of blood for twelve years, who had spent all her liveliehood on physicians and could not be healed by any, came from behind and touched the border of His garment.  And immediately her flow of blood stopped…Now when the woman saw that she was not hidden [emphasis mine], she came trembling; and falling down before Him, she declared to Him in the presence of all the people the reason she had touched Him and how she was healed immediately.”  ((Identity))

Luke 7:12…”And when He came near the gate of the city, behold, a dead man was being carried out, the only son of his mother; and she was a widow.  And a large crowd from the city was with her.”  ((Resurrection))

Mark 5:2-6…”And when He had come out of the boat, immediately there met Him out of the tombs a man with an unclean spirit, who had his dwelling among the tombs; and no one could bind him, not even with chains, because he had often been bound with shackles and chains.  And the chains had been pulled apart by him, and the shackles broken in pieces; neither could anyone tame him.  And always, night and day, he was in the mountains and in the tombs, crying out and cutting himself with stones.  When he saw Jesus from afar, he ran and worshiped Him.”  ((Deliverance))

John 4:5-9…”So He came to a city of Samaria which is called Sychar, near the plot of ground that Jacob gave to his son Joseph.  Now Jacob’s well was there.  Jesus therefore, being wearied from His journey, sat thus by the well.  It was about the sixth hour.  A woman of Samaria came to draw water.  Jesus said to her, ‘Give Me a drink.’  For His disciples had gone away into the city to buy food.  Then the woman of Samaria said to Him, ‘How is it that You, being a Jew, ask a drink from me, a Samaritan woman?’  For Jews have no dealings with Samaritans.”  ((Acceptance))

Matthew 14:14-15…”And when Jesus went out He saw a great multitude; and He was moved with compassion for them, and healed their sick.  When it was evening, His disciples came to Him, saying, ‘This is a deserted place, and the hour is already late.  Send the multitudes away, that they may go into the villages and buy themselves food.’”  ((Provision))

John 8:3-5…”The the scribes and Pharisess brought to Him a woman caught in adultery.  And when they had set her in the midst, they said to Him, ‘Teaher, this woman was caught in adultery, in the very act.  Now Moses, in the law, commanded us that such should be stones.  But what do You say?’”  ((Forgiveness))

And on and on and on I could present accounts in the New Testament where Jesus (and His disicples) experienced similar (and more varying) encounters with…people.  Whether the people were (are) morally bankrupt, spiritually dead or sleepwalking, physically afflicted, mentally broken, religiously yoked, or utterly demonized, the common thread is that we all share a garment of flesh and are created in the image of God.  We, as born-again Believers, have access and ability to walk out our meted-out minutes in the fullness of God’s counsel and purpose.  Yet, we must “graduate” from believing to following for this fulfillment.  Believing is the faith.  Following is the obedience.  Without obedience (through God-led works), our faith is D-E-A-D.  Dead.

That’s not the driving point of this post, though.  This is:  During an intimate time in the Lord’s presence yesterday, I was grieving loss and persecution.  For myself.  For others.  I was just burdened with sadness at the waves of lost relationships, accusations, misappropriated anger, unforgiveness I’ve experienced, propogated, and witnessed with others (givers and receivers of such) the last few years.  As my eyes leaked and heart ached, I felt the Lord encircle me with His embrace.  He held me, ministered unconditional love and acceptance to the rejected and wounded places. 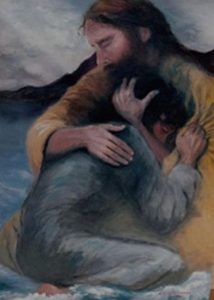 Then He showed me Jesus…the fully-yielded-to-God’s-will Jesus who was pursued/persecuted/accused by people who were yoked with religion.  Jesus who was rejected by His own people whom he grew up with and loved.  Jesus who sought out (and was sought out by) people who wanted-needed healing, identity, resurrection, deliverance, acceptance, provision, forgiveness.  And He reminded me in that moment — in a most spiritually-tangible way — that as I (you) yield to His purpose and work out my (your) salvation with fear and trembling, those who are religious or stubborn/rebellious at heart will persecute/accuse/reject me (you).

More importantly, though, as I (you) walk in repentence and forgiveness, I (you) will be in a posture to recognize those who want-need healing, identity, resurrection, deliverance, acceptance, provision, forgiveness and will be a vessel of God’s love, joy, peace, longsuffering, kindness, goodness, faithfulness, gentleness, and self-control (Galatians 5) in leading those people to freedom and life abundant.

Stay tuned.  God is doing something in me (you).  I will be sharing more in the weeks to come about the Scripture accounts shared at the front of this post.  There is a pearl in each, but for now I offer this reminder from 2 Corinthians 10:  “For though we walk in the flesh, we do not war according to the flesh.  For the weapons of our warfare are not carnal but mighty in God for pulling down strongholds, casting down arguments and every high thing that exalts itself against the knowledge of God, bringing every thought into captivity to the obedience of Christ, and being ready to punish all disobedience when your obedience is fulfilled.”

((Tammy’s paraphrase:  Look folks…as long as we are on this side of eternity, we are in a war.  Not a war against people but against the demonic armies of Satan who know our weaknesses and exploit them.  So, quit using the Word as a battering ram against people, and stop fighting the flesh of others!  Use the Word as a measure of our own thoughts, and also as judge, jury, and endictment, punishment against the enemy of our souls.  When we do this, God will bring justice.))

Learning and growing with you,