“I’m offended because you’re judging me, you hypocrite!” (Sequel) 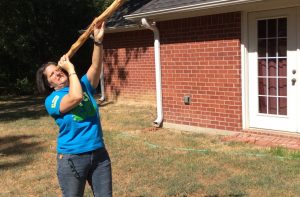 Pic of me with my plank. Photo cried goes to my French son, Maxence. (He probably thinks I’m crazy…uh…craziER.)

Good Morning, my friends!  I know the “day or two” for concluding my previous post has turned into “a week or three,” but I have not forgotten nor neglected.  When Mr. Husband and I returned from our fabulous and exhausting exploration of Texas Hill Country, I had two ((TWO)) days to finish “preparing” our home to welcome two French, teenage sons into our family for three weeks.  You know what I am inferring between those two quotation marks and in that word preparing, don’t you?  (Wink.  Wink.). You know, preparing as in dusting the areas above my 5’1″ eye-line-of-shot, cleaning interior window sills that stay hidden behind blinds (uuummmm, ick…have we ever cleaned those since we built this house??), and buying the rug to cover the stains on my youngest son’s bedroom carpet.  …Hey, don’t judge…which reminds me…let’s finish this exploration of Matthew 7:1-5.  Got your ((COFFEE)) and your Bible?  I do…

If you have not read the first part of this post or would like to re-read it, you will find it here. 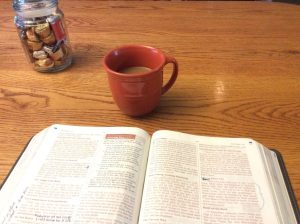 My Bible, my ((COFFEE)), and a variety of chocolate for back-up…just in case, ya know.

Matthew 7:2…”For with what judgement you judge, you will be judged; and with the measure you use, it will be measured back to you.”  ((Insert big ‘ole swig o’ COFFEE here.))  The first six words in this verse offer a great measure of inspective and introspective insight on the often misinterpreted subject of judging/judgments.  We all make judgements…like every day…throughout the day.  Judgements are the moments we use that three pounds of miraculous, functioning tissue and neurons and dendrites and axons between our ears to distinguish or make a decision about something or somebody…positive OR negative…good OR bad…to esteem OR to condemn…to accept OR to reject.

Here is how it works:  “A neuron receives input from other neurons (typically many thousands). Inputs sum (approximately). Once input exceeds a critical level, the neuron discharges a spike – an electrical pulse that travels from the body, down the axon, to the next neuron(s) (or other receptors). This spiking event is also called depolarization, and is followed by a refractory period, during which the neuron is unable to fire.

The axon endings (Output Zone) almost touch the dendrites or cell body of the next neuron. Transmission of an electrical signal from one neuron to the next is effected by neurotransmittors, chemicals which are released from the first neuron and which bind to receptors in the second. This link is called a synapse. The extent to which the signal from one neuron is passed on to the next depends on many factors, e.g. the amount of neurotransmittor available, the number and arrangement of receptors, amount of neurotransmittor reabsorbed, etc.”  (www.williamette.edu)

Now, I could expound tongue-in-cheek about how it seems there is a population who is deficient in neuron spiking and synapses…or is enjoying an extended stay in refractory period, but I won’t.  I share this scientific, professional explanation of how our brain functions to highlight the fact that we were created with the ability to:  (1) Think, (2) Reason, and (3) Decide.  In reference to verse 2, it is understood that we WILL judge and mete.

For example, if I judge Girlie Gossip through a lens of arrogance under the banner of justice…and take my internal judgement for a walk through my lips to the ears of another…then I will be judged and measured in the same manner…and I am being a hypocrite.  ((A hypocrite is one who is an actor or pretender.  A hypocrite is also one who judges others for sins they are currently and equally walking in.))

If, however, I were to judge Girlie Gossip through a lens of agape love under the banner of mercy…and privately exhort her from a heart that has had the same struggle, then I will be judged and measured in the same manner…and I am being an ambassador of reconciliation.  The lens we use to look at others is the manner in which we judge, and the measurement we use in our judgements is how we manage that judgement.  It has taken me yeeeeeaaaarrrs to figure out that I would much rather be judged and measured under mercy than under justice. Hey, just saying.  ((And I’m still in training, too.)) 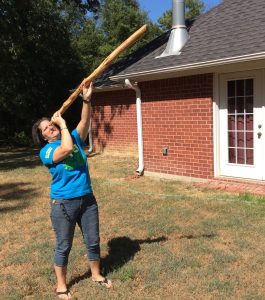 Pic of me with my plank. Photo cred goes to my French son, Maxence. (He probably thinks I’m crazy…uh…craziER.)

Ahem.  ((Clearing throat and checking my armor as I step into a mine field…)).  This is going to be [somewhat] short and [maybe not so] sweet.

Bonus Thoughts:  We have become a culture that is entirely too afraid to offend and is too easily offended.  First of all, there is genuine, justified offense.  I am not speaking to this.  Then there is a spirit of offense that cooperates with people who seek to criticize and find fault in others out of their own unforgiveness or insecurities/fears.  These are people with a plank in their eye, and they are blinded to it because their good eye is in attack mode as it is focused on the people around them.  There is also the person who cries, “Hypocrite!” anytime someone tries to teach or correct them because the plank in their eye has blinded them to their defensiveness that is born of guilt (non-Believers) or conviction (Believers).  Again, a hypocrite is someone who is acting or pretending.  This person is typically offended because there is a truth spoken that reveals an area of their life that is not aligned with God’s Word or Will.

Here it is: Before we consider calling someone’s sin or weaknesses to their attention, we ought to look in the mirror of Scriptures and attend to the Counselor’s voice to make sure we are as free as we need to be for such a task…not perfection, but being perfected...AND that we are being appointed to address it.

Conversely, if we are the one receiving an exhortation or correction that offends…ya know, the kind that causes our heads to spin on our shoulders and our core body temp to go from California climate to volcanic lava quicker than drag racer Shawn Langdon’s 270 feet per second…then perhaps we might-maybe-possibly want to take that thing to the One on the Throne for inspection before we lash out with labels, ya think? 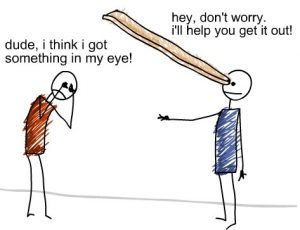 Alright friends, I’m exhausted and tapping out.  Plus, my cup is out of ((COFFEE)).  Until next time, I am still…

Learning and Growing with You…Tammy Sinclair