As I recently steered my vehicle into the pothole-ridden entry of a riverside camper park while working a temporary government job, my senses and discernment immediately collided with the spiritual darkness that ruled the acreage of the unkempt park, its dilapidated campers, and their residents.  Weaving my way through mucky mud and around hungry holes begging to swallow my vehicle’s tires, I spotted two men outside their camper at the far end of the park who might be able to help locate the lot numbers I needed to visit.  One of them was a 30-something who was whacking away with a machete at a long walking stick…and it was soon evident that he was under the influence of meth.  The other man, who appeared to be in his 50’s and also with signs of addiction but more lucid, approached my stopped vehicle with the younger following closely behind – machete and all – as I had rolled the passenger window down and was waiting with a smile.

Introducing myself and purpose with kind confidence, I asked if they could tell me where a particular lot was located. In that moment, I noticed the unique and beautiful character of the stick the younger was holding and, as a hiker-liker, commented, “Wow! I like your walking stick…that’s cool the way it twists at the top!” Without hesitation, he replied, “You do? It’s for you! Unlock your back door….it’s yours!” Ignoring my polite protests at taking his stick he had been machete-whittling and sweating over (and my internal concern over opening the doors to a stranger with an oversized knife in one hand and miniature log in the other), I unlocked the doors, and he quickly placed the walking stick in the back seat before rushing away. Before the Texas humidity could say “sweat,” he came back to the passenger window grinning hugely, extending his hand, and announcing, “Here…this is for you, too!” He was placing half of a large clam shell with a beautiful, pearl-colored interior in my front seat. “You can put jewelry or something in it. It will be real pretty.” I expressed my appreciation for his gifts, finished the conversation, then went about the tasks of my job. 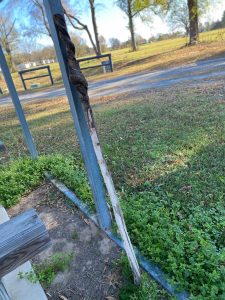 As I drove out of the park about 20 minutes later and got down the winding river road a good Texas mile, I thought, “I can’t wait to use that walking stick on my next hike, but I have no need for that shell.  It’s probably got traces of drugs on it, and what if I get pulled over by a K-9 unit, and what if the dog smells drugs on the shell, and what if…what if…?”  Sooo, despising that shell’s potential demise (and, honestly in that moment, the young man for even putting me in the situation my vain imagination’s impending arrest), I rolled down the window and tossed the shell out…watched as it bounced off the concrete and into the tall, damp grass.  I knoooowwww.  I hear the gasp and shock in your soul; yet, my soul was not aligned in that moment.  Later that evening  as I reflected on the day, God reminded me of the shell and put His finger on my heart…then applied (just enough) pressure as He breathed, “That shell…the one you threw out the window like yesterday’s trash…was one of that man’s greatest treasures…and he entrusted it to you.”  Oof.  ((He entrusted his greatest treasure…to me.))  Ouch.  My soul immediately and sufficiently grieved.  I promised God if He would preserve it for me, I would look for the shell and retrieve it the next day.

Perhaps (probably) you also, friend, have discarded (despised) something (someone) because it (s/he) did not complement the motif of your home (life).  We all, at some moment, have felt rejected or that our gift to another was disregarded.  Maybe you have been excluded in an invitation to a friends-gathering or lingered in the lonely place of feeling unseen, unheard while in the company of others.  Recall the awkward struggle between wanting to look at the homeless person and reach out in that moment, but the pressure of time/fear/pride/apathy give us an excuse to look the other way and keep moving.  It is also possible that you (I) have been in church and measured and dismissed another based on their appearance/countenance/speech…or it has happened to you (me).

Visualizing the young man’s face and eagerness to give as I made covenant with God that night to find the shell and give it a home with me, He quickened with this Scripture: “Take heed that you do not despise one of these little ones, for I say to you that in heaven their angels always see the face of My Father who is in heaven. For the Son of Man has come to save that which was lost” (Matthew 18:10-11). Unpacking these verses as a transliteration word nerd, we are exhorted to clearly discern and attend to the dangerous disposition of disesteeming or despising another who is small in age or dignity because Jesus entered, passed through our world, and reigns in Heaven to deliver and heal those who are perishing…including that young man with a machete, a walking stick, and a shell. Simply, we are exhorted to stay awake as we navigate our moments so that we do not miss opportunities to minister or that we do not disregard those who are struggling more than us. Take a few minutes to reflect on the moments and people who ministered the love of Jesus for us when we were the one being pursued by the Savior.

Consider the possibilities we encounter daily, fellow sojourner, that are divine appointments choreographed by God as an extension of His hand to join Him in the dance of agape love for mankind.  Perhaps it’s the exasperated young mother behind you in the grocery line who is wrangling littles and could use a smile with a pass to go in front of us.  It could be the co-worker who is the 50-grit, spiritual sandpaper to our soul, yet we choose to extend grace and kindness that reaches into their own broken places.  Maybe it is attending to the still, small voice that measures and addresses our words as they travel from our heart to our brain and before they leave our lips.

Without doubt, I can be a brat. A huge brat…but (eventually) an obedient one. The next day after work, I drove that windy river road at slow mph looking for the shell. It was better than Christmas morning’s glory when I spotted the shell and retrieved it in all of its river-formed perfection…not a scratch or a break from the previous day’s pavement surfing. Now, everytime I look at that shell, I remember the man who shared from an unselfish heart despite his own battle with addiction and pray for him. Everytime I use that hiking stick, I will again think of him…and pray for him. Again and again and again. Christ follower, allow me to encourage you to lean into the earthly ministry of Jesus through the Gospels. Explore how He met people in agape (charity) love by meeting them at the point of their greatest soul needs in order to reveal Himself. These were not chance encounters but divine appointments choreographed by God…just like we Believers experience with regularity. Let’s follow Jesus as we practice living intentionally and loving authentically. 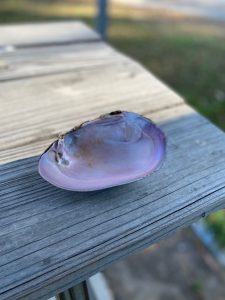 The young man’s treasure is now mine…with joy and prayers.

Prayer: Abba Lord, thank You for divine appointments, which place Your finger directly on the places in my heart that are not aligned with the breath of Your Word and Will. I yield myself for Your Spirit to align the thoughts, emotions, and will of my soul with the pulse of Your Word and movement. Cause the overflow of my heart to radiate the love and grace and service of Jesus Christ to reach into the lives of those I encounter so precisely, so profoundly that they are drawn to the fragrance of eternal, abundant life. Examine me, Father. Know my heart, test and prove me, and guide the course of my every breath and step, so I can fulfill that for which you have purposed me. Selah and so be it.

Learning and Growing With You ~