And unless you have been touring the sands of the Sahara on the back of a camel…or exploring the rain forests of Brazil…or traversing the snow-topped peaks of the world…or fasting from news and social media…you have probably noticed the “state of offense” our nation is in right now. 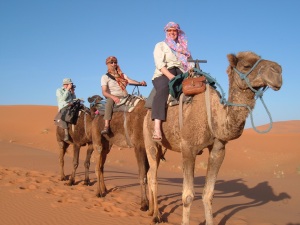 People (not me) on camels in the Sahara Desert
(www.saharaatlastours.com)

What has been a manageable annoyance in my lifetime  – sort of like a snowball fight where both sides stay behind their shelter and lob spheres of snow at each other – has evolved into a hold-em-down-and-smear-the-snow-in-their-face-and-shove-the-snow-down-their-throat war.

“Where is this dripping sarcasm coming from, Tammy?”

My cup of ((COFFEE)) this morning…almost time to top it off.

((SIDE NOTE:  I debated on whether to write this entry with a serious tone or as an anecdote woven together with satire.  I’m reasonable and decided to compromise, so I’m writing this in a serious tone sprinkled with sarcasm.  If that offends you, take a sip of ((COFFEE)) and keep reading.))

So, as I am not fasting from social media, I was perusing Facebook the other day and read a sweet friend’s post that was gently venting – in my opinion – about her frustration with seeing people post one thing about how good God is, then their very next post is railing and cursing against someone they know…personally…like in relationship with at some professional or social or intimate level.

And then my friend did the unthinkable.  She had the audacity to bring Scripture into her post.

Something about “Does a spring send forth fresh water and bitter from the same opening?” (James‬ ‭3‬:‭11‬ NKJV) …and…some other craziness about how we shouldn’t talk out both sides of our mouth (reference James 3:9…in fact, just go ahead and read James 3:1-18).

Then she was blasted with an angry comment framed in bitter undertones that said the Bible does not condemn “$¥%#” or “€@*&” as sin and accused my friend of being a hypocrite and judgmental.

Here is where I exit tounge-in-cheek, clear my throat, and enter serious mode.  😳

Before expostulating on the core issue of many people’s general understanding and application of hypocrisy and what it is to be judgmental, I must first address something.

True, the Bible does not specifically delineate American curse words that are sin. It does, however, repeatedly throughout all of Scripture address our speech, our words, the curses or blessings we speak and what they produce.  Saying the Bible does not call specific curse words a sin, so it’s okay to curse someone (soul killing), is like saying, “Well, the Bible doesn’t say I shouldn’t kill someone specifically with a .38 Special Smith & Wesson (thank you, Mr. Husband), so it’s not a sin to physically murder someone with that specific weapon”…which is a perfect segway into my exhortation, fellow believers and choose-not-to-believers.

Read Matthew 7:1-6, get some more ((COFFEE)), put on your hiking boots, then let’s explore what these words mean.

Verse 1:  “Judge not, that you not be judged.”  Ahem.  This is probably one of the most quoted, most misunderstood, most abused verses from the Bible.  People have taken this somber instruction that was delivered from the heart and lips of Jesus and turned it into a go-to, defensive, counter-attack cliché.  Many, when they spit this verse, are typically saying, “I’m offended/angry/hurt/convicted that you don’t agree with/accept/approve my beliefs/choices/lifestyle/behavior.”

In the context of what Jesus was actually teaching, He was saying that when we judge others outside of unconditional love but instead out of a spirit or attitude of condemnation, fault-seeking, motive-questioning, or hypocrisy (addressing this in a bit), we will be judged (called into question, tried) ourselves.  We ought to examine ourselves through the reflection of the Scriptures consistently before we prayerfully and lovingly point to a weakness in another’s life as we maintain a commitment to Godly correction and restoration.  I mean, seriously, when we as parents see our children about to engage in something that will harm them, we correct them, rebuke them, redirect them, teach them.  It’s the same concept when approaching others when they need accountability and correction.  Refer to Matthew 18:15-20.

Well, my friends and fellow sojourners, I’m going to give us a day or two to chew on and properly digest the verses and precepts to this point.  I will finish with a sequel that teaches on verses 2-6, and it would be a beneficial thing if you were to look at and study those with me until then.

Learning and Growing With You…Tammy Sinclair

Me (and Mr. Husband) are on our way to float the Guadalupe River…deuces! ✌🏼😘